Bangladeshi singer-actor Hero Alom was recently arrested by Bangladesh police for his singing. In this bizarre event, the police asked the singer, who has many fans not only in his own country but also in India, to stop doing his renditions of the classic songs that everyone loves. The police reportedly told him he was too ugly to be a singer.

Alom, who calls himself “Hero”, Alom spoke to AFP and he revealed: “The police came for me at 6am and kept me there for eight hours. asked why I was singing Rabindra and Nazrul songs. He further added that the Bangladeshi police told him that ‘he was too ugly to be a singer.’ They also allegedly made him sign an ‘apology’ bond.

Dhaka Chief Detective Harun ur Rashid said the police department has been receiving numerous complaints against the singer for a long time. He said: “We have received many complaints against him. (He) totally changed the (traditional) style (of singing). He assured us that he would not repeat this. He also said the out-of-tune artist apologized for the seemingly awful rendition of classic songs he did. He also expressed regret for wearing a police uniform in his music videos without permission. 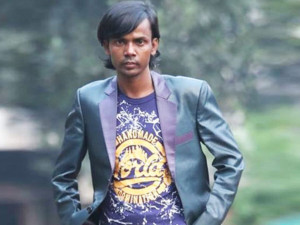 Hero Alom has over two million followers on Facebook and over 1.5 million subscribers on YouTube. He has been criticized for making disrespectful and horrifying versions of iconic songs by Indian Nobel laureate Rabindranath Tagore and Bangladeshi poet Kazi Nazrul Islam. Despite the hate and criticism his music receives, it has gone viral, providing endless entertainment for viewers. His music video “Arabian Song” has been viewed over 17 million times on YouTube.

The singer alleged that the police even told him to change his name. He told AFP he took the name after appearing in several Bangladeshi films and running in a parliamentary election in the country as an independent candidate. He said: ‘I felt like a hero. So I took the name Hero Alom. I won’t drop that name no matter what. Right now, it seems like you can’t even sing freely in Bangladesh.